Right now, it seems like the whole world is falling in love with the foul-mouthed, wise-cracking, fourth-wall-breaking, superhero Deadpool. The film is one of the most successful R-rated movies of all time, and audiences just can’t get enough of director Tim Miller’s irreverent take on the superhero genre.

The ladies of Sheri’s Ranch, the Las Vegas area’s premier legal brothel, have also been stricken with Deadpool fever. After all, the titular character is a “pansexual” love-machine who falls for a prostitute named Vanessa and partakes in a wide variety of sexually deviant activities with his newfound paramour. The film is a flagrant celebration of naughtiness, rife with hysterically perverse sex scenes that include more than a few fetishes.

While the film pokes fun at the proclivities possessed by its leading character, the prostitutes at Sheri’s Ranch know that many of the delightfully depraved sex acts showcased in the film are far more popular than some audience members might suspect. For years, people with a longing to explore their fetishes in a discreet and nonjudgmental environment have flocked to Nevada brothels, where prostitutes guide clients on new carnal adventures and cater to their desires. So, for those of you who have seen Deadpool and are intrigued by some of the sex acts performed in the film, don’t fret, you can get the full Deadpool sextravaganza right here at Sheri’s Ranch…

A Year’s Worth of Sex in One Session

In the film, Deadpool and Vanessa celebrate just about every holiday in a sex montage that spans an entire year.  Valentine’s Day, Chinese New Year, Halloween, Thanksgiving, Christmas – the characters find a way to make each of these Holidays interesting with a bit of role-play and, hopefully, a whole lotta lube.

The ladies of Sheri’s Ranch are the superheroes of the sex industry. These experienced courtesans are well-trained for sex parties that involve a variety of positions and the use of various sex toys over a longer-than-average period of time. A Sheri’s Ranch “sex marathon” is the perfect way to reenact the entire year-spanning Deadpool sex montage in one exhilarating and exhausting session. Do you have the libido and sexual stamina of Deadpool? Maybe not, but you’ll have the time of your life trying to find out. You bring the vampire teeth and turkey dinner; the ladies will supply the condoms and erotic accessories. 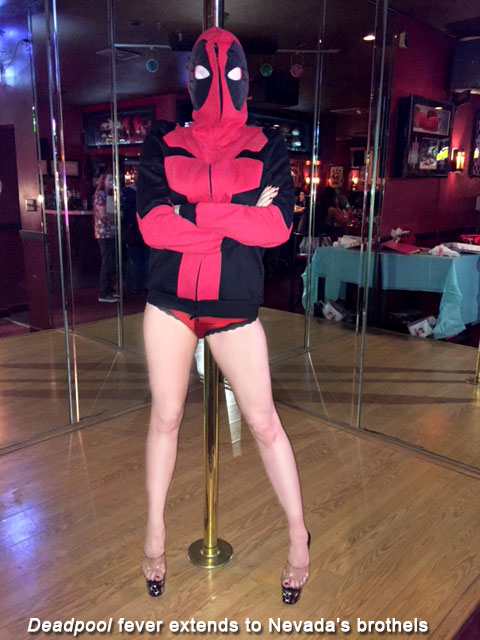 Deadpool is definitely a hero with multifarious sexual tastes, not the least of which is his attraction to a certain plush unicorn. If you want to go where the lead character goes, you need to get a crash course in plushophilia (a sexual penchant for stuffed animals) from the ladies of Sheri’s Ranch as part of your Deadpool-inspired experience. If you’re wondering what Deadpool does when he’s alone with his favorite inanimate object, Sheri’s prostitutes will be happy to answer all of your questions. 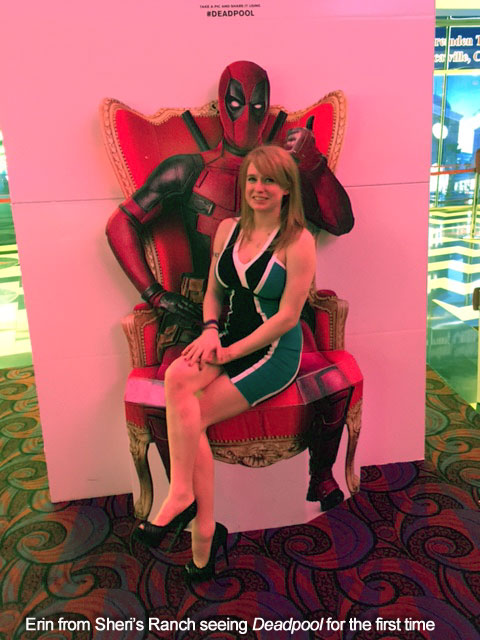 Do you think you share Deadpool’s non-traditional sexual interests? Bend over, channel your inner hero, and let the sex workers at Sheri’s Ranch help you find out…