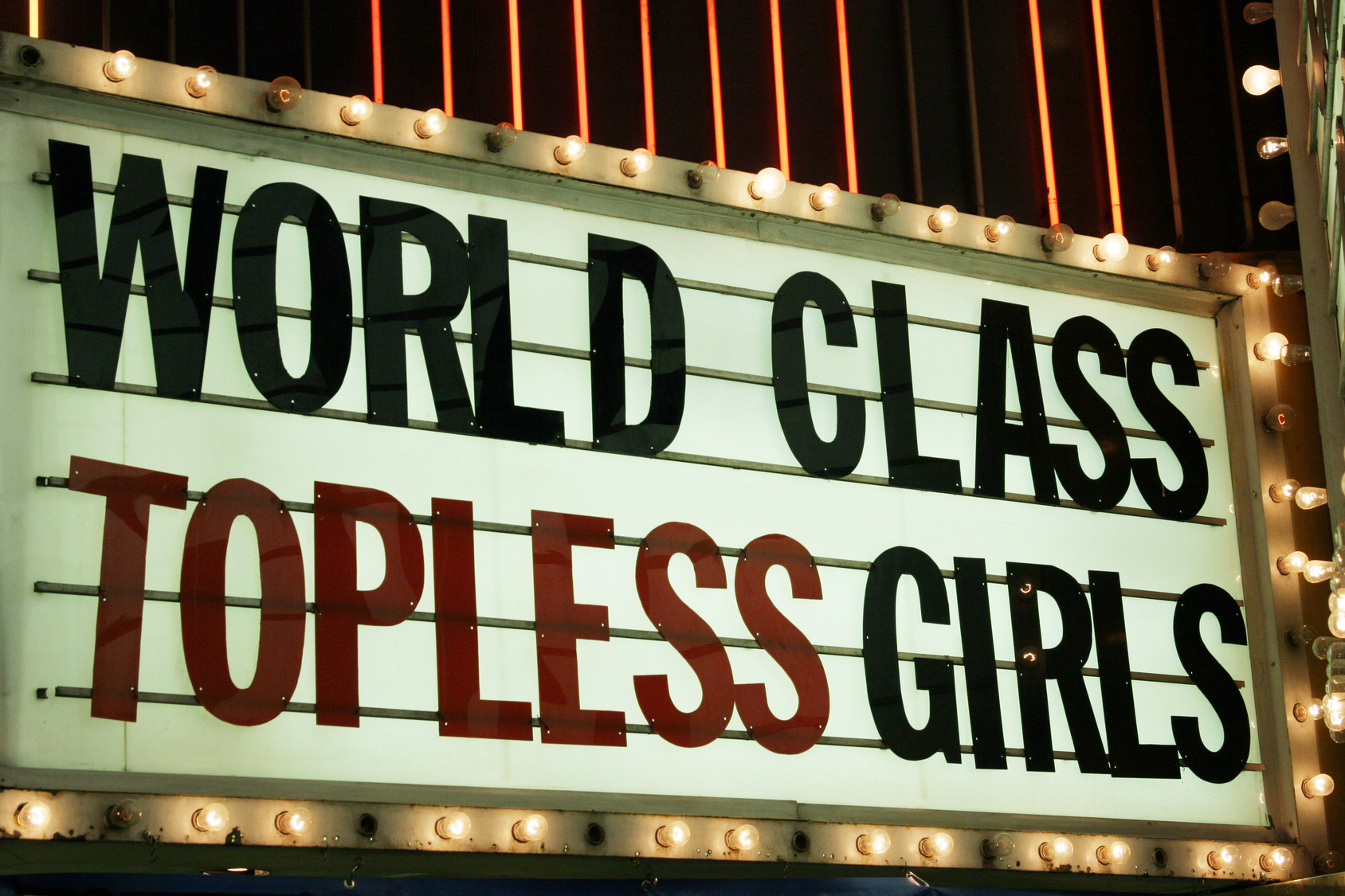 I’m amazed at how much money gentlemen spend in Las Vegas strip clubs. Now, those that read this are going to believe I’m bashing the strip club experience. I’m not! Some clubs are amazing places to party, relax, enjoy the sights and sounds and the entire experience. What I am amazed about is how much money is spent so a guy can be teased into a frenzy, many times believing the gorgeous (or not so gorgeous) girl giving you a lap dance is going to go home with you – only to find yourself home alone and fondling those balls-turned-blue.

I said I’m not going to bash the strip club experience, but I’m not afraid to tell you the truth about them either. I did very well as a dancer/stripper/adult entertainer. But the reason I did well was because I kept the money I worked for. And let me tell you…it IS work, exhausting work. I did well because I was old enough to have life experience, but looked young enough to attract a lot of customers. What I’m saying is that to do well in that business, a girl needs the maturity of a woman, but the looks of the rookie. Oh, the young rookies did well, but most of the young girls I met had very bad habits and major spending desires. They made big bucks but were always broke.  They also had very demanding boyfriends waiting for them at the end of their shift, to count the dancer’s money. 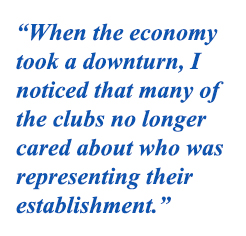 Strip Clubs in Las Vegas were once known as the very best in the country and even in the world, filled with gorgeous girls that were full of talent. They truly were entertainers and put on a real show when they took the stage. Those women still exist, but they do not fill the clubs anymore.  When the economy took a downturn, I noticed that many of the clubs no longer cared about who was representing their establishment. They no longer were hiring the “best of the best.” Why? Well, to work in a strip club, a dancer has to pay. It’s called a house fee. Imagine hundreds of dancers paying 100 dollars or more just for the privilege of working there. Then, there are fees to eat, fees to drink, fines to pay for behavior a bouncer may determine is against house rules, etc. Then there’s tipping the bouncers, tipping the house mom, tipping, tipping, tipping. You do the math: If it’s a big club and there’s a hundred girls working, the house fees alone bring in 10,000 dollars to the club. Add in all the other fees and tipping and the club does quite well from the dancers before a customer even spends a dime there. So what’s the incentive to only hire the best of the best? Clubs started to look at making money from the fees they charged to the dancers instead of attracting and entertaining well paying, loyal customers. So, a club ends up with very little loyalty from either the customer or the dancer.

Now I worked in some of the very best clubs in Vegas. Trust me, they can look very, very busy. But that doesn’t mean the girls are making money. When the girls aren’t making money, they become very concerned about their bills. When they realize they are going to be on their feet for 8 or 10 or 12 hours, they go into a phase I termed as “Sharks in the water”, or the “feeding frenzy”.  I would watch gentleman come into a club, looking to first have a drink and relax a little, only to be swarmed by what appeared to be sharks feeding on red meat. Some guys felt so pressured as soon as they sat down at the bar that they had their one very expensive drink and simply walked out of the place.

Then there were the men that spent hundreds and thousands of dollars to party in the VIP. 275 dollars for a bottle of champagne, bottle after bottle, all in the hope that something special was going to happen to them in the dark. Maybe a daring dancer got a guy off from rubbing her gorgeous booty hard enough on a guys cock. Maybe a very daring dancer snuck her hand where it’s not supposed to go and gave a guy a hand job. I plead the 5th on some of those things because, well, it’s illegal. But the money that I saw spent on a possibility of being jerked off in the dark, or more likely grinded to orgasm, simply amazed me and still does.

Then there is the assumption that dancers are screened for their honesty, their politeness, their customer friendly attitudes, etc. I met so many girls that worked for pimps. And if it wasn’t a real pimp, it was some domineering boyfriend that was shaking her down when he picked her up from her shift, yelling and screaming at her because she only made 200 bucks after all her fees and expenses. How’s he going to pay for that corvette he lets her drive? 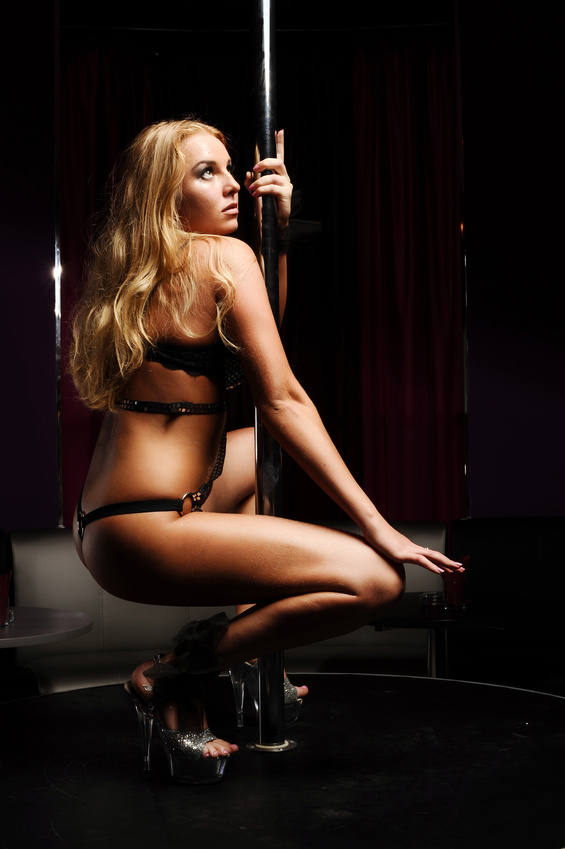 There were the girls that just could not get on stage without being drunk or high on some kind of drug. Lot’s of drugs, lot’s of pills, lots of snorting in the dark. Sure the clubs are going to deny it, but there’s no way they can watch that many girls. Lucky for me, I was and never will be a drug user. But then again, alcohol is a drug. And after seven years or more of being in that environment, I found myself drinking way more than I could handle as a 106 pound little “spinner”.

Bouncers? One would think the bouncers are there to keep the peace and protect the dancers. That’s the biggest joke of the job. Many bouncers are there to shake a dancer down for money. “Hey, I think I saw you rubbing that guys dick. Maybe I won’t tell if you throw me some of that green stuff.” If a bouncer doesn’t like you, chances are you go to work, find yourself removed from the clubs list of girls working, and your off and running to see if you can show up at the door of another club and audition quickly and get hired there. 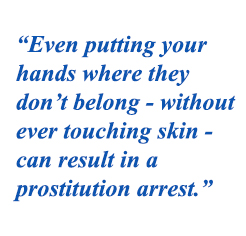 The very worst part of the experience though, as a dancer, is the competitive cut-throat actions of many of the dancers. I’ve seen dancers that were popular and consistently made money incapacitated by suspicious means. Most likely, there drink was drugged by another dancer with the intention of eliminating their competition. It happened a lot. It happened to me. I got so sick from one drink, only to be rushed to the hospital. A drop of Visine in your drink can just about kill you.

Law enforcement is yet another factor to consider. Make a wrong move, say the wrong thing, and the next thing you know, a dancer is rounded up with 10 other girls, charged with prostitution. What did she do? Well, she may have done something very illegal. But remember, even putting your hands where they don’t belong without ever touching skin, can result in a prostitution arrest. What if an undercover says he’ll take you to the VIP and asks you what you’re going to do to him? A dancer could just be teasing, trying to get the guy to spend money. She might say she’ll jerk him off or give him a blow job with no intention of ever doing it. She finds herself arrested. She offered sex for money. Do girls actually take a chance and do sex acts? Yes, it happens. But whether she does, or just teases that she will, if she’s talking to an undercover she’s DONE.

OK, I said I wasn’t going to “bash” strip clubs. But I guess that’s what I’m doing. But it’s not necessarily bashing. It’s just telling it like it is. I’ve worked for some great clubs that treated me like a damn princess. These were the smart owners. They knew what dancers brought in the best customers. They knew what dancers had the sales ability to sell bottles of champagne and sell the fantasy and the experience. And they rewarded me and other experienced dancers by treating us well and protecting us in every way they could. After all, we were bringing in customers and money. We were good for business. When I worked for those kinds of owners, I loved my job! It was a thrill to put on a real show on the pole and have guys and even other girls throw money at you on stage, truly appreciating the show. 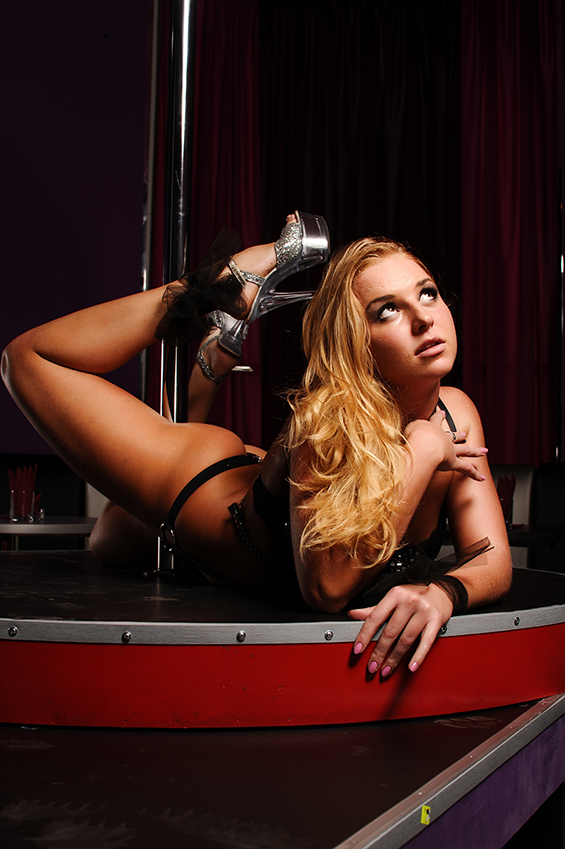 But unfortunately, there are many owners that don’t know or care which dancers are bringing in good customers. And there are many owners that hire dancers that actually hate what they are doing. Imagine coming to a Nevada brothel and running into a bunch of ladies that hated what they are doing, felt trapped in their job, had to get bombed to do their job, and were like the feeding frenzy sharks that populate the strip clubs? Who would feel comfortable spending their time and money at such an establishment?

But it’s so different at a legal brothel. A gentleman, or a lady, or a couple visit a wonderful establishment. They can communicate well in advance, with a variety of ladies about what they like or don’t like. They can establish a relationship, a friendship, a comfort zone. They can negotiate with the lady of their choosing and see if they are a match. They can deal with professional ladies from all walks of life, who actually love what they do and don’t have to look over their shoulder, fearful of arrest or the stigma of arrest. Why? Because what we do is legal! The customer has the best chance of actually getting what he or she is paying for! It’s not a tease with “balls of blue” as the end result. Oh, you may be teased because you want to be teased…but the end result is usually something a customer remembers for a life time.

A licensed brothel cares about who they hire. We may be independent contractors, like dancers are, but we are hired for our experience, friendliness and professionalism. A “cat fight” over a customer is NOT tolerated. Drunk or drug addicted women and women that hate what they do for a living will never last.

In other words, a Nevada brothel offers strip club fun in a safe, friendly environment! It’s a wonderful place to stay and play. Think about it. I’m not trying to put strip clubs out of business. They will always exist and be popular places for adult fun.  But why not come to a place where you can have a wonderful experience without all the risk and empty promises of a club? You may find out that when all is said and done, it’s not how much money you spend, but how much value you receive from the money you spend.